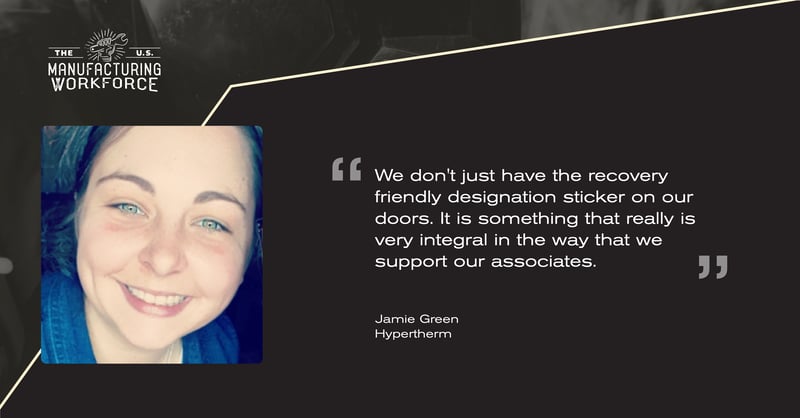 “Anonymity is killing people,” shares Jamie, in speaking about living and working in recovery.  What does it mean to have an official recovery-friendly workplace and to not only share openly what people are living through- but actually help them?

While the opioid crisis raged around the country, Hypertherm in New Hampshire was figuring out a way to respond to the needs of its immediate workforce. Not only is the company investing in their own people, but also in advocacy efforts for the surrounding community.

Join us as Jamie Green, Environmental Stewardship Specialist at Hypertherm shares her very personal story of going through recovery at work, and Stacey Chiocchio, the Community Citizenship Manager at Hypertherm, shares the development, growth, and importance of the initiative.

➡️ Details of Hypertherm's initiatives and program development over the years

➡️ Benefits to these changes include staff retention and upskilling

Dating back to 2015, an opioid crisis soared across the state of New Hampshire, which could not be ignored by Hypertherm, a metalworking machinery manufacturer that is 100% employee-owned. As associates began coming forward expressing their personal struggles with substance use disorders, raising awareness to the Hope Team, which is the funding team for the foundation, that they supported previous community initiatives but never revolving around substance use disorders. Hypertherm felt as though they could not sweep the issue under the rug, and needed to take action. This was the starting point of when their recovery-friendly workplace started to take shape.

Their next steps were to conduct research and educate themselves on best practices for removing the stigma and provide support programs to help employees sustain their recovery. It took as little as placing resource cards in bathrooms which sparked the movement. In Stacey's opinion, "any manufacturer who thinks they don't have someone who's there with a substance use disorder is, frankly kidding themselves."

It became apparent to HR that Hypertherm's old-fashioned policies were walking hard workers out of the door who were under the influence of an opioid or alcohol, urging HR to collaborate with the foundation team. Here is where their 'substance misuse agreement' came into play, which became a joint partnership between employers and associates. After a couple years of embedding these practices into their company culture, Hypertherm noticed an increase in people coming forward and seeking treatment. They expanded their program to train employees on administering Narcan, designating recovery resource champions, and installation of NaloxBoxes which are boxes containing Narcan, that could be placed alongside of their AED machines.

Details of Hypertherm's initiatives and program development over the years

As Stacey says, "it's not all going to be roses, rainbows, and butterflies and unicorns, it's definitely gonna be rocky." Not every employee is going to be on board with this kind of initiative, but with the support of Hypertherm's leadership team, they were able to kick off leader training, which entailed multiple sessions lead by a reminder from the CEO of how crucial the program was to the company's DNA.

One lesson learned was the idea to train internal recovery coaches yet on day two they realized it wasn't going according to plan. They were trying to accomplish something that professionals train years for and have since pivoted them to be called 'Resource Champions'. Associates now know the resources available to them and can connect with people who have shared similar experiences, and came out on the other side. With that being said, Hypertherm is not designing recovery programs, but putting them in contact with a Licensed Drug and Alcohol Counselor (LDAC) who is trained and certified at the required capacity.

Benefits of these changes include staff retention and upskilling

Jamie states, "we don't just have the recovery-friendly designation sticker on our doors. It is something that really is very integral in the way that we support our associates."

The accommodations available to Jamie allow her the grace to attend support meetings as needed and follow her 12-Step Program, all of which contribute to sustaining her recovery. She has also been given the opportunity to work her way up the Hypertherm ladder starting on the inbound team and transitioning to order fulfillment. During that time, Jamie worked as a green champion, which is the program she currently oversees, that drives projects for sustainability and stewardship, and she was able to develop a lot of these skills she did not have before, which leveraged her latest title as Environmental Specialists.

Hypertherm's mission is people first, planet second, and profit last, which emphasizes associate well-being is paramount to anything else. Based on Jamie's personal experience she feels they gave her a fresh start and she now has her associate's degree, she is starting her Bachelor's program and bought a house. Jamie believes she is a more loyal employee thanks to the opportunity she was given to live up to Hypertherm's expectation of integrity.

Specific tips for companies wanting to create a recovery-friendly workplace

Hypertherm started by creating a 'substance use disorder task force', initiated by a campaign inviting volunteers interested in supporting substance abuse. Here are a few questions to ask yourself in the beginning stages:

An additional tip for taking action would be to install NaloxBoxes next to all AED machines within your manufacturing facility, which is not expensive, and this alone will draw people in to start sharing stories. Another good step to take is to avoid alienating employees when it comes to work events that promote a healthy and happy lifestyle without the use of drugs or alcohol.

I.e. Instead of having a 25-year celebration at a brewery go on a hiking trip or host it at a bird sanctuary.

In recovery, it is imperative to have a supportive network of like-minded people so they can work together and build an atmosphere of safety and camaraderie, which is the goal of Hypertherm's Recovery Network including these three main parts:

Life is hard enough as it is without substance use disorders

Hypertherm's associates show up every day, doing their best and their best means different things each day, right?

If we change our approach to be more transparent and compassionate in regard to other people's struggles, although it's challenging, having these conversations with both people who are and are not yet in recovery, can potentially save your workforce from high turnover and attrition. There are people who understand that substance abuse is a disease, not under the control of the person who is suffering from it, and then there are people who think that it's a weakness and a choice which is not the case at all!

One call to action Jaime suggested for people living in recovery is to stop focusing on anonymity and open up about their stories --  ignore the fear of stigma. Sure, it sounds so easy, but if you feel you have the bandwidth to do so, take that first step.