Strike While the Iron is Hot: What's Happening In Labor Relations 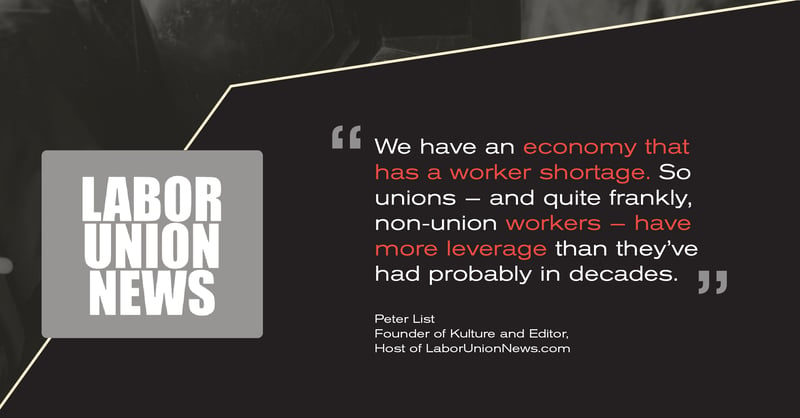 In today's episode, we sit down with Peter List, who comes from an extensive portfolio as Editor of LaborUnionNews.com and, LaborUnionReport.com Editor, Host of Labor Relations Radio Podcast & UnionFreeRadio.com, and Founder of Kulture, LLC. Peter also specializes as an Employee and Labor Relations Consultant resolving workplace issues, but after 40 years of experience, he began focusing more on union prevention and union avoidance.

➡️ Protecting the right to organize

We will also discuss the large manufacturing labor disputes that occurred last year in 2021 and what union and non-union companies should be prepared for in the year ahead.

Last year, we started seeing a spike in labor dispute activity. Some of the large manufacturing strikes that made national news last year include:

Due to a bubbling up of issues triggered by the pandemic such as working conditions like mandatory overtime, safety, and pay converged with labor shortages, union members now understand they hold the power at the negotiating table - the epitome of "strike while the iron is hot".

Essential factory workers remained on production lines, despite shutdowns in early 2020 at the start of the pandemic, while the hospitality industry came to a halt and others switched gears and worked from home. Non-union members felt undervalued for their risk and loyalty efforts which prompted protests and talks of unionizing.

Bargaining has evolved over time, and people are pushing for new benefits, such as paid time off for social activism or resources for mental health. Starbucks is seeing this generational uprising firsthand as many pro-union baristas in their early 20s fight in an effort to unionize. After feeling left in the dark from a lack of communication with management regarding COVID safety throughout the pandemic, the younger workforce is hopeful that organizing will empower them to have a voice that will be heard.

This uprising arrived just in time when the US approval rate of unions is conveniently close to record levels. Recent polling of 1,006 people, conducted by Gallup, found 68% of Americans condone labor unions. Other statistics include:

We are seeing a shift where feeling good in the workplace outweighs compensation, and young Americans are ready to take a stand and break the cycle of being unhappy in a career.

Protecting the Right to Organize

If you haven't been keeping up, there is a lot going on in Washington right now for manufacturing employers to keep up with. Here's what lies ahead for the future:

Although mostly geared toward Federal Agencies, employers need to keep in mind the following:

The House passed a bill on January 28, 2022, that Democrats believe will ramp up production of semiconductors in the United States and give America the upper hand in competing with China.

The bill has a number of allocations, including:

Companies receiving these grants are required to sign onto union neutrality, card check, and binding arbitration.

This was developed around the Obama era, yet failed to get through the Senate however, based on today’s law, secret meetings can be held off-site, and at least 30% of employee signatures are required by the NLRB for a secret ballot election.

A micro-union is a single department or a small fraction of employees, including two or more, which does not represent an entire company.

I.e. - If you have 6 employees total at a restaurant made up of 2 wait staff, 2 cooks, 2 dishwashers, you could potentially have 3 different unions representing those 6 employees because they're broken down into three classifications.

Employees getting quiet or the new guy that’s all over the plant floor could be signs of union organization. "Salting the workforce" is an old term originating from the construction industry pertaining to bonafide union organizers who apply to job postings with the intention to recruit others in joining union efforts. Union plant moles pose another threat to organizations and typically spend a couple of months getting to know employees and finding a company's week spots, then report the information back to the union organizer.

What you can do as an employer

Being union-free is being issue-free. Take steps to identify your issues by talking to your company's greatest asset, the employees! Ask the good the bad and the ugly:

Avoid unionizing by keeping up with what’s going on. That means stepping away from your desk and walking around the plant floor before things blow up. Keep in mind a workforce that is treated well, will be less likely to participate in card signing.