Unions are unifying around the WI battle and coordinating rallies across the country for April 4 – the anniversary of Martin Luther King’s assassination. The goal is to frame collective bargaining as a civil rights issue and to ride the momentum of pro-union demonstrations. The “We Are One” website is encouraging unions, people of faith, civil and human rights activists, students and other progressive allies to host a range of community and workplace-focused actions such as:

The question then is, if this pro-union momentum continues, how will it impact private sector collective bargaining and what can and should you do to protect your businesses’ interests moving forward? All companies, unionized or not, should be paying close attention to these events as they unfold - especially companies that will be negotiating collective bargaining agreements this year.

If you are getting ready to head to the negotiating table, we recommend that you review these four tips to strengthen your company’s position at the bargaining table:

1.) Conduct Site Assessments and prepare Business Continuity Plans (BCP) in Advance.
If you do not have a strike contingency plan in place already, get started immediately. If you do have one, make sure to review it well before you begin negotiations so that you can make any necessary updates and have accurate copies available prior to your first negotiating session.

3.) Be prepared for contentious negotiations
Be prepared for your bargaining unit to feel more empowered than in years past. The battle in WI and other state around the U.S. has caused union leaders to speak out and here is what they are saying:

“Walker lit a fire in Madison that has spread across the country, not just with union member’s but with everyone who depends on someone else to sign their paycheck. Our fight has just begun” 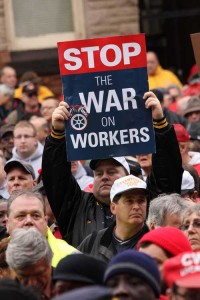 "..the American people are watching and they know what is going on. The covers have been pulled off - and they get it. They see governors and legislators who, on the one hand, want to take away the worker's chair at the table, but, on the other hand, has plenty of seats at the table for their billionaire corporate backers."

"This is a nation-wide campaign by billionaires and country-club conservatives, to terminate workers' rights, giving unfettered power to corporations."

"The battles over collective bargaining rights, right-to-work legislation, and other labor issues taking place in Wisconsin and other states have spurred the labor movement its greatest level of international and grassroots activism in decades. Union members instinctively understand that the crop of newly elected governors, backed by big money from some of the most powerful corporations and individuals in the world, are all to negate unions as an effective force for working people."

“Last night in Wisconsin, legislative process trumped democratic principles. Republican Senators voted 18 to 1 to strip public employees of their collective bargaining rights. It is a Pyrrhic victory and one the GOP will regret.”

4.) Don’t Be Afraid to Take the Measures You Need to Protect Your Business
Your company has a legal right to operate during a strike and may do so with supervisory employees, employees willing to cross the picket line and/or with temporary replacement workers. If a pattern of unlawful strike conduct is properly captured, it may be possible to obtain an injunction or temporary restraining order against the unlawful picketing activity. If circumstances warrant, a suit for damages against the union may also be filed.