By Michele Vincent, Aug 10, 2011 , in Scabs and Confectionery and Bakery and North Dakota and video documentation and strike security and Minnesota and American Crystal Sugar and replacement workers and Strike Busting and Labor Dispute and Mark Froemke and BCTGM and Lockout and AFL-CIO and Labor Dispute Management Services and Strom Engineering and Union Busting and strikebreakers and Moorhead and NLRA Compliant Evidence Gathering and Collective Bargaining and Tobacco and Grain Millers
0
0
0

As a long standing provider of Labor Dispute Management Services, our team at MADI is always combing media and the web looking for issues and trends regarding Labor Disputes, Human Resources, Labor Laws and Regulations and the like. Over the past weekend, LaborUnionReport.com‘s Peter List tweeted about this article in the Star Tribune (Minneapolis) that caught our eye. 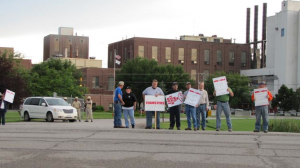 As you may be aware there is a labor dispute taking place at American Crystal Sugar’s Minnesota, North Dakota and Iowa plant locations and Strom Engineering (a competitor) is supplying services during the work stoppage. It might seem a bit unusual but in defense of Strom there appear to be a number of what to us are erroneous assertions were made in the article that deserve mention, since Strom’s CEO John Radick did not counter. First is this quote in the article by Mark Froemke, president of the AFL-CIO’s West Area Labor Council. “To us, Strom is basically an outfit that hires mercenaries to basically go in and destroy communities.” Makes a great sound bite, but nothing could be further than the truth about the prominent companies in our industry.

When a business finds itself in a position where it cannot remain competitive, jobs are often lost. That is the problem. The reality is that with all that is going in the global and US economies right now, many companies can no longer, unfortunately, sustain the costs negotiated in previous collective bargaining agreements. I think no one would blame unions for not wanting to give up gains won over the years, but are they sustainable? This is the reason why service providers like MADI and Strom have and continue to exist. It is too simplistic to suggest that we are hired guns that destroy communities.

In fact, MADI helps to level the playing field and restores balance during the collective bargaining process that in the end protects jobs and protects communities. A couple of other comments in the article also note attention. In a quote attributed to Robert Michael Smith, Professor of History at Sinclair College in Ohio, “…many firms have adopted high tech ways to intimidate unions, such as videotaping their activities.” Labor disputes can be hostile, by definition. Can there be any doubt that unions are adept at using technology as well? Is it fair that with so much riding on success unions would want to exploit any and all means they can to further their bargaining positions? We know first hand that they do, often with no thought of safety and the rules of law.

MADI’s clients, most of which are very well known publicly traded and privately held companies, do not lightly place their reputations and brands at risk. They also understand Local, State and Federal regulations require the highest standards of corporate conduct and compliance during the Collective Bargaining Agreement process; with stiff penalties for any infraction.

Ironically it can be argued it is the unions who most often push the envelope and challenge these laws and regulations. MADI’s presence and robust documentation practices alone often help to neutralize danger, enforce safety and keep the focus on the business at hand, which is to negotiate a contract. Is this intimidating? We offer this up for you to be the judge.

As far as Strom’s alleged business practices noted in the article, such as hiring ex-convicts, sending out improperly skilled or trained replacement workers, invoking a 12-hour “no bathroom” policy and “driver panic” on the picket line… we are not in a position to comment directly. However these comments appear to foster a misleading perception regarding Professional Labor Dispute Management Services as being akin to “strike busting” and hooliganism that we at MADI certainly do not, have not, and will not tolerate. We would also argue this assertion also does a disservice to the companies, and associated entities that we serve. What do you think?

Click here to read/write comments
Back to the Madi Blog